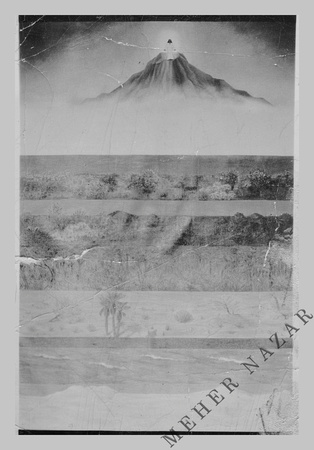 A photograph taken by Rano of a painting she did in 1935.

In 1934, when Baba was in America, he gave Rano instructions to paint a painting with the following: "Beginning at the bottom, paint strips of landscape. First only sand, then water, then desert, then mountains, vegetation and then fields... with a mountain and a portrait of me on the top."

Rano painted the picture in New York in 1935 (approximate size 6' x 3') and took one photograph of it. She sent the photograph to Baba, who probably gave it to Adi Sr. (from whom this copy was obtained).

In 1936, when Rano was called to come to India, she wrote to Baba asking whether she should bring this painting, and he replied not to. What became of it is not known.

This painting turned out to be a forerunner of the Ten Circles Chart which Rano later painted in 1937 and which is now in the Meherabad Museum.
© Meher Nazar Publications
Powered by ZENFOLIO User Agreement
Cancel
Continue