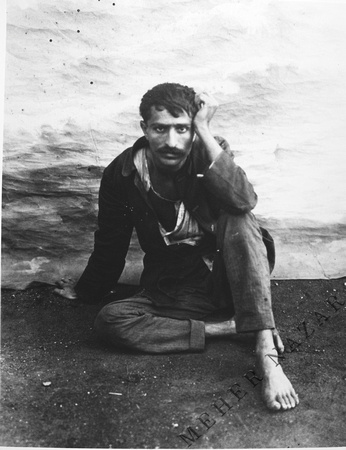 "Meher Baba had not bathed during his entire six-month stay at Upasni Maharaj’s ashram in Sakori, and his clothes had become ragged and full of lice. Reaching Bombay by train, he went to Munshiji’s house on Charni Road.Munshi was now an important official in the Bombay Backbay Reclamation Scheme. He was very happy to see Baba, but was shocked by his condition. He pleaded with Baba to bathe, and Baba consented to do so with Munshiji’s help. Before bathing, Baba agreed to be photographed, and Munshiji sent Sayyed Saheb in his car to bring a friend of Munshiji’s who was a photographer. After Baba had bathed, either that day or a few days later, a second photograph was taken of Baba in a suit and tie."
© Meher Nazar Publications
Powered by ZENFOLIO User Agreement
Cancel
Continue