Home»All Photographs»Paintings and other miscellaneous Images 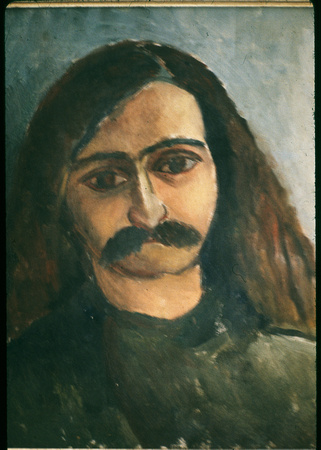 painting of Baba done by Anita Vieillard after she met Baba in Harmon in November 1931.

The painting is now kept at the Meher Center Archives in Myrtle Beach.

Baba inquired about [Anita's] interests and when she said she was an artist, he gestured humorously, “Could you paint me?”
She answered, “You are too beautiful and would be too difficult to paint.” Nonetheless, two days later, Anita returned to Harmon with Norina (and again on the 18th) and, at Baba’s request, attempted to paint his face. Despite several sittings, Anita found that Baba’s expression kept changing and she left the canvas unfinished.
Anita later recollected about that incident:
I hadn’t really studied portrait painting, but Baba guided me to do it. Painting him was a great experience, because I learned one cannot put down that which is ever-changing. It would take pages to describe the event of being in Baba’s presence while I painted. I cannot tell you how long it took, because there was no sense of time in his presence. Baba looked at me and I lost all sense of time. Everything about him was ever-changing — Baba’s eyes, the color of his skin, his expressions. It remains a great mystery to me.
I told Baba, “One cannot paint you because your expression changes every moment. You are never the same!"
Baba laughed and commented, “Yes, you are right. I am ever-changing.”
I realized after a long time what he meant by “ever-changing” for it is life itself — the Divine Play!
Courtesy of Meher Nazar Publications
Powered by ZENFOLIO User Agreement
Cancel
Continue